To become a prepper, you should be ready for anything that may come. Including home invasion or terrorism. Most of us don’t have the luxury of owning entire gun arsenals.  All you need is to have guns for survival. The tips I’m about to give you are based on practicality. They are ideal for those people who are just starting in the firearm field.

A rimfire rifle is an absolute must to all preppers and survivalists.  Why is it a good weapon of choice? Well, the ammunition is cheaper and more available than centerfire ammo. It is good for hunting and self defense. If I have to choose one gun  in any survival situation, a rimfire rifle is my best and absolute choice.

The best .22 caliber rifle for all purpose use is the Ruger 10/22. Its stock is made usually made of birch wood or synthetic stock. The weight is about 5.0 pounds. It is simple but has a lot of customization options. this is the most important weapon among all guns for suvival

Your best choice in choosing a sidearm is a 9mm because it has large magazine capacity. Glock17 or Glock19 is the best economical choice among all 9mm pistols. For a more expensive choice, go for a CZ-SP-01 because it has a full metal frame.

A .22 caliber handgun is also a great choice if your primary is a.22 caliber rimfire rifle. Because they use the same ammunition.

This is a more expensive substitute for a rimfire rifle. It has more expensive ammunition but it has more firepower and can take down larger targets. If you have the money to buy a better rifle, you should pick a well-equipped combat rifle.

A great home service firearm would be a shotgun. Although it is not an all-around firearm, it is a very good substitute for a combat pistol. It is feared by home invaders because of its firepower.

There are reasons why shotgun are only best for home defense (well, unless it’s designed for hunting). If you have a rifle and a shotgun at the same time, it would be difficult to switch in between primary and secondary weapons because you will have to strap one on your back. A shotgun is usually used for close-quarters combat which makes it a bad choice for open-field use. 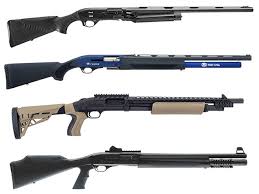 You can add all these guns to your arsenal but if you don’t have the money to buy all of them, you need to prioritize and pick the best one. What’s important is, you have guns for survival.

1 thought on “Guns for Survival: What Guns Should I Have?”