For us to shine some light on this topic, we will today be discussing projectile survival weapons. As we give some really basic, excluding firearms, but nonetheless useful example members of the family.

If you don’t have some fancy weapon or device, you can rely instead on your hands to throw projectiles. For example, in more urban situations, you can use loose change as a good way to stun your target or in a more wilderness case, you can try to throw rocks at targets. Just don’t expect to take them more times than not with your weary arms or your limited strength and accuracy.

The rabbit stick, or rather the throwing stick, is a very good weapon to “throw” at smaller game; such as squirrels and rabbits.

It’s curved naturally around 45 degrees and essentially is a blunt stick. The two opposite sides of the stick you shave off to make it as flat as a boomerang. For the desired angle, you will be the one to select from heavy hardwood material.

Key components for the throwing technique are speed and accuracy.

For you to get a good throw (also remember to practice):

You first need your nonthrowing arm extended and aligned to the lower to mid section of your target.

Then you will have to repeatedly raise slowly your throwing arm up and back until you align it with your nonthrowing hip.

Bring then your throwing arm just slightly above and parallel to your other nonthrowing arm. This is the release point. 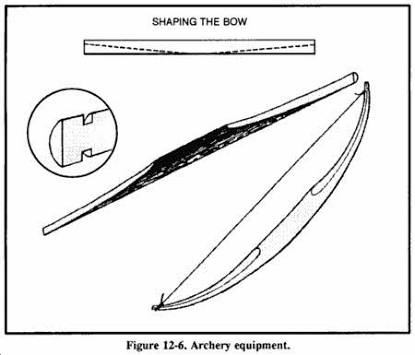 A good weapon to have that is pre-made or otherwise fashioned would be the bow and arrow. If fashioned, just don’t expect it to still be intact after an extended period of use. It’s construction and repairs, however, you can do fairly easily. One should use the straightest and driest available sticks for the arrows and then smooth them out. For the arrowheads, you can make these from bone, metal, rock or even glass.

The bow and arrow requires lots of skill put into marksmanship. You whether or not wanting to make or acquire and then use one will depend on how much you make worthy the time and effort of having one. 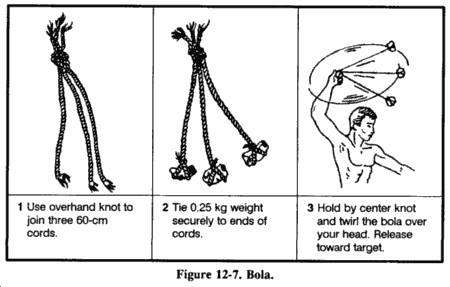 Another good projectile-based weapon that is easy to make is the bola. Running game you can easily capture with this device or rather weapon.

To use it, you first have to hold it by the central knot and then twirl it just above your head. Release then the knot to send it flying. When it hits, it can wrap around and thus immobilize the target.

We talked about making an (improvised) slingshot in a previous post.